Where I would walk from my old neighborhood in San Antonio, Tx.

Four Movies That Make Me Cry Like a Little Bitch

By way of introduction, let me just say there ought to be a Motherfucker Party for Oscar Night.

Specifically, the speech where Rick says "the lives of three people don't mean a hill of beans in this world."

Whenever I had a girlfriend who hadn't seen Casablanca, I made her watch it. I felt it was my responsibility as a man.

The speech where Porco describes a terrible battle in the last summer of the first world war always makes me cry like a little girl.

Porco is quietly passing Spirited Away as my favorite-ever Miazaki movie.


Dancer in the Dark

Although I own the DVD of Dancer in the Dark, I have only been able to watch the movie in its entirety once. Now that I know how sad and powerful the film is, I can't bring myself to watch it at all.

Once I walked in on Apple about half way through Dancer, sat down and bawled my eyes out for the next hour.

By the way, Dancer in the Dark, Casablanca and Die Hard are the best movies ever made.


Royal Tenenbaums
Specifically, the scene where Margot walks out of a Green Line bus in slow motion and the Nico song plays. This is the moment when we first understand what it means for Richie to love Margot.

Deciding Not to Decide

During college, I told my Dad I didn't want to do any internships until after school, and he told me "you'll be a year behind the other 23 year-olds." I remember thinking "Are you ahead or behind other 58 year olds?"

Adulthood isn't a race. Hell, it's barely a voyage. Lately I'd been struggling to figure out where I rank in life, and it's a tremendously frustrating undertaking.

So last week, I decided to give it up. I had told this lady about how I try to judge myself constantly and she said "does it have to be every day? What about once a month?"

That was what it took. For the first time in maybe my entire adult life, but certainly since I left school, I decided to give myself a break. I decided to stop trying to decide if I was doing the right thing with my day or my life. I'm taking a vacation from judging myself.

It makes sense. I've been spending so much energy trying to decide if I'm doing the right thing with my time that I have run out of energy to do things and time to do them in.

But what really concerns me is how little work I've gotten done. Without feeling an obligation to myself to do them, the no-budget films I've committed to just feel like a burden. The problem with my method of forgiving myself - at the moment, at least - is that I never learned another reason to do things other than crushing, self-inflicted guilt. I need some healthier habits.
Posted by ribble at 8:15 PM No comments:

New York is defrosting this week after a short but difficult winter.

When I first moved to New York, I regularly caught myself thinking that any moment someone would come up to me and say "I'm sorry, but you aren't allowed to be here. You need to move back to Texas. NOW."

Living in New York is a tremendous privilege, and one of the reasons why is that is has some of the best parks and public spaces in the world.

Walking around Manhattan yesterday in the first warm-ish weather of the year, I started thinking about what I thought about all the spots I've gotten to know in my time in New York. Here they are, in handy map form. Don't forget to scroll.

Posted by ribble at 1:07 PM No comments:

Just as pandas eat faster than they migrate, I create chaos in my apartment faster than I clean it up. Left to our own devices, I would become overwhelmed by books, papers, mail and dirty dishes and my life would cease to function.

The pandas would die.
Posted by ribble at 9:27 PM 2 comments:

Miyazaki and Magic That Can Happen

The magic I like is the magic you can almost believe.

I've had this idea for a long time that it's possible for magic to exist in our world, this world that we live in every day, but we could never be completely sure it existed. If someone saw something magic, there would always have to be a possibility that it was all happenstance and coincidence since, arguably, that would inevitably be the case.

It's a very tricky problem that I've tried to think about in a lot of different ways. One way is by thinking about movies that have done everyday magic very well. 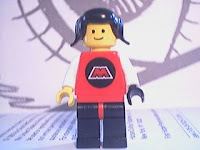 I'm writing this today because last night I watched Hiyao Miyazaki's extraordinary Spirited Away. All Miyazaki's films involve magic. Maybe half of them start with a magical world (Princess Mononoke) or a magical main character (Kiki's Delivery Service).

The ones I enjoy the most, though, start in our world, and the magic is either very small (Porco Rosso contains exactly one talking pig) or very slowly or carefully introduced (Spirited Away, My Neighbor Totoro,Whisper of the Heart).

Most of the time, Miyazaki's main character is a young girl. Having a child as a main character helps us accept the magic of his worlds, because the audience puts itself in the place of the protagonist and a child doesn't question magic in the same way an adult does. 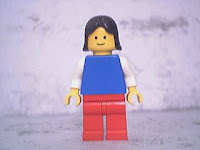 For example, one of the very simple spells that Haku casts on Chihiro early in the film will keep her invisibly as long as she holds her breath until she walks all the way to the other side of a long bridge. As Miyazaki points out in a documentary about the movie, this is something that might not make logical sense to an adult, but makes perfect sense to a child.

There is also something deeply personal and specific about Miyazaki's magic that makes it impossible not to accept. There's a very powerful sequence where Chihiro takes a train away from the bath house where most of the story has taken place so far.

Everyone on the train is a black, faceless figure moving around slowly and sadly in old, 1950s-style clothes, in sharp contrast to the colorful and energetic characters so far in the movie. They look like half-forgotten memories. There is something so personal to the sequence that you have to believe in it, even if you don't fully understand it.

Miyazaki is so good at getting us to accept his world that we can almost believe that it exists one wrong turn away. That's what I want my movie to do.
Posted by ribble at 8:43 AM 4 comments:

How I Got My Other Nickname

Remember how Wales is a couple of years behind the United States? Well, lately former students at the inexplicable school I attended in that country have slowly been discovering Facebook.

I link to my blog from my Facebook profile (it is, indeed, the way in which most people end up here), which means that some of those people will soon discover this site, which means they will just as inevitably leave comments, which, trust me, means that I would have had to tell this story eventually anyway.

So. Funny story. So when I got to this odd, foreign school in Wales, I was American, carrying a large computer (although, ironically, it was this computer), wearing glasses and I guess there's a little bit of a resemblance from the side and, well.

My college nickname was Bill Gates.

At first, I tried to fight it. This, of course, made it worse. Then, I just came to accept it. This is kind of cool in that I can now give out a name that has absolutely nothing to do with my actual name and know that I will have no trouble answering to it.

However, it is generally very uncool.

I now have what I consider to be a somewhat cool nickname. It is ribble or, barring that, ribbles. It is ambiguosly posessive. I have exploited this fact. It is somewhat unique. I am beating licorice ribbles.

However, I know now that, just as you cannot fight the ocean, we cannot fight our nicknames. At best, we can choose the nicknames for our pets
Posted by ribble at 2:35 AM 4 comments:

Okay, I was totally unprepared to miss my cat this much.

My cat is away for the night because the nice women at the clinic took out some of her lady-bits and she needs to recover and what not.

Why do I miss this cat so much? We only met a few weeks ago, maybe a month. I really had no idea this would happen. I am actually considering putting a scarf on a pillow and petting that to get it out of my system.

Sure, it's kind of cute - but like many cute things, it's also kind of pathetic.

I'm picking up my cat again tomorrow morning.
Posted by ribble at 10:02 PM No comments:

While vomiting in to a trash can on a subway platform last night, it occured to me that I may have chosen the wrong occupation.

The main problem with being a self-employed no-budget short film producer is that it is a largely unstructured job.

The problem I've always had with a lack of structure is that I can never define a time when I should not be working, so I'm constantly worrying about what I do and don't get done. 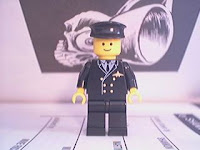 Recently I've been working all afternoon until I get tired, and then not having the energy to do anything, and then doing nothing. For example, it's been weeks since I've written in this blog.

Last night I hit something of a low point. I was coming home from a friend's birthday party, exhausted, and had to get off the train at Whitehall Street to throw up in the trash can on the platform.

It's not exactly that getting sick was stress-related; mostly, I'm sure it was stomach-virus related; but there's nothing like vomiting to make you wonder what exactly it is that's gone wrong with your life up until that point.

So my plan right now is to finish the projects that I've already committed to - all of which are pretty good projects anyway - and then take the time to find the real job that pays that is right for me and will help me to be happy. 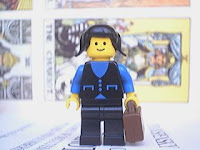 Something that IS going well is the cat.

I adopted Kino shortly after this post. Right now, she is sleeping at the foot of my bed, blissfully unaware that she is going to be spayed tomorrow.

Here are the things Kino likes to do:

* Sprint from one end of the apartment to the other, then repeat.
* Fight lengths of string.
* Be pet, then wander away, then eventually wander back.
* Stare.
* Complain if her bowl's empty.
* Actually sit and let herself be pet for awhile, then slowly decide that she would prefer to attack whomever is petting her.
* Scoot her butt against my carpet in a very offensive way.
* Knead.
* Wake me up in the morning, presumably because she's bored.

That's pretty much it. If it were up to me, I would maybe choose a cat who would more often settle down, but this is my cat and I'm quite happy to live with her quirks.