I have been watching a lot of Deadliest Catch, like enough that if anyone else were around, I would be a little embarassed by it.

Sometimes I have big ideas and some times I have small ideas (er, that one got cancelled, by the way - awkward!). This is a small one.

You know how George Lucas had the crew of Star Wars watch archival WWII fighter footage to learn what space dogfights should look like? I think anyone who's going to do a dirty future sci-fi series should watch Deadliest Catch.

These are real, working-class guys in a big ship that isn't terribly maneuverable and doesn't always work. These are no fighter jet analogues - they're closer to, say, Firefly.

The moment that brought this home for me was in episode 30, "Caught in the Storm" (one of the more Zissou-esque episode titles). 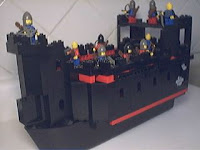 Capt. Greg Moncrief of the Farwest Leader is trying to get his boat out of a harbor before a storm hits and traps him there - a tricky maneuver as the harbor has a protective dogleg just big enough for the boat and waves outside are rising.

It's a tough bit of piloting and the look of pure concentration on Moncrief's face is extraordinary.

Okay, so I immediately compared and contrasted with the "Leaf on the Wind" sequence in Serenity.

Differences: Walsh engages in witty banter. Moncrief speaks only three times: "holy shit" (on seeing the waves), snapping at his wife (which is all instinct anyway) and talking in a relaxed, easy manner once they make it out safely.

Walsh looks straight forward. Moncrief gets up out of his chair for quick looks around (of course, Walsh is moving much faster).

Walsh is getting yelled at and things are exploding all around him. Moncrief easily insists on total silence, and it's creepier.

Similarities: Maneuvering big things in difficult circumstances, danger of death or destruction, and that look of total concentration. Both get up at some point to hit a switch (Walsh, as a rule, hits three switches). Both pilots are confident. 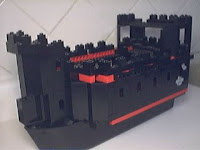 Why this is not a perfect comparison: Moncrief is not being shot at. Also, one is fiction. And has a soundtrack.

Takeaways: Any ship maneuvering system, even a hypothetical one, is going to have a single main piloting mechanism that will occupy most of the pilot's attention (all of it during these tenser moments). If he needs to make another adjustment, he doesn't look at it for long.

No one wants to talk while they're precision piloting, so if you're going to write someone in to the cockpit, your pilot isn't going to talk like Han talks to Chewbacca, much less Leia.

The pilot always knew he could do it.

Here's the thing: Deadliest Catch is full of these moments that have been imperfectly translated to sci-fi and the ilk - in fact, I'm pretty sure you could do a scene-by-scene translation from the reality show to a sci-fi movie (they are hunting space crab!)

Like when Capt. Jonathan pulls a man out of the water. Those guys run around like chickens with their head cut off! They are not well-drilled on these situations! We need to see more of that in our fiction.
Posted by ribble at 12:47 AM

I won't lie, I've looked everywhere for fanfiction for DC and can't find any.... so I started writing my own. My friends and I started original fics about crab fishers on the bering sea.... I know that it's sad, but we're obsessed.

I was impressed when I saw that you came here looking for actual Deadliest Catch fan fiction. Most people are just trying to figure out what a Susan B. Anthony is.

i am writing my own fanfiction right now! Here's teh link if your interested:
http://www.fanfiction.net/s/4159907/1/Greenhorns_and_Rivals

Ooh ooh! I've read "Greenhorns and Rivals", the fanfiction posted by 'Anonymous' and it's fantastic!

I, too, am pretty much obsessed with Deadliest Catch although I'm not afraid to admit it. It's just a real show with real guys doing their real job and it's incredible! LOVE IT! :)

A quiet evening watching Deadliest Catch episodes on Netflix. My boyfriend turns around and says "Suge, you think there is Deadliest Catch fanfic?"
/google
Yes, yes there is.

I just started writing a Deadliest Catch story :)
It's called Little Miss Greenhorn and you can find it here: http://www.fanfiction.net/s/5234957/1/Little_Miss_Greenhorn