Obscure Analogies in the Middle of the Night

I am wide awake in the middle of the night in a brand new house in New Hampshire. Sleeping in a brand new house reminds me of that scene in The Hitchhiker's Guide to the Galaxy where they steal the Heart of Gold and foam packaging flies out as they try to use the controls to make a getaway.
Posted by ribble at 4:54 AM No comments:

At some point along the way, I completely lost track of how I appear to other people.

For example, I know when I look in the mirror that I am wearing my best pants, I am about 15-20 pounds above HWP, I am 25 years old and semi-employed, and that my glasses are a bit too small for my face.

I have no idea how much of this someone meeting me for the first time knows or cares about. Who do I seem to be to other people? Do I seem too old for my clothes? Can they tell what I've been eating? Am I attractive? Is it my imagination, or do girls notice me more when I'm tired and a little unshaven?

The last time I felt like I knew what strangers were thinking about me was when I put on a suit (for a business meeting about a bank loan) and people started opening doors for me and smiling at me a lot. Okay.

The last time I remember getting an impression like that before was sometime in my mid to late teens when I noticed everyone I talked that was older than me, men and women, seemed to summon some sort of nostalgia for when they were a young man with limitless potential. I became, quite without any effort on my part, the embodiment of some particular ideal of youth.

Since then, I really have no idea. Perhaps because I dress poorly and live in New York, I am mostly ignored by strangers.

Okay, there was one other time when I knew for sure how I looked to other people. It was late one night (really early morning) when I was working on the feature - I think maybe the first day we were upstate, when I was responsible emptying the bowels of the RV. Maybe it was week three when a bag had broken and I'd had to clean up a bunch of trash with nothing but my hands and a pair of gloves. Doesn't matter.

Anyway, when I got back to the city, all I wanted was breakfast, the use of a bathroom, and a place to wash my hands. Every part of me was sweaty and dirty. I had also, inexplicably, worn a white shirt that day, which exaggerated the effect. Plus I think it rained. Oh, and I was also wearing khaki shorts and sneakers with black socks, so add that to your mental image.

I walked in to the Bus Stop Diner, a place I knew from when I worked nearby. Bus Stop is a small, no-nonsense place that I'd developed an affection for over that year. I sat down and asked for coffee.

Huh. Okay. "I guess I'll just leave my bag here and use the bathroom."

I didn't know what was going on, and at this point I was too tired to focus on anything too complex. I decide to head for the Times Square McDonald's. Fast, anonymous service, bathrooms, and burgers for breakfast - it was just enough to bring me back to baseline.

So I haul my exhausted carcass up to the Times Square McDonald's, but as I approach the bouncer walks up to me, sticks out his arms and shakes his head as in "no, there is no question in my mind that you are not entering this McDonald's."

I walk on. This was surprising for several reasons: 1) Time Square McDonald's has a bouncer, and 2) Apparently I was so dirty, nasty and (presumably) homeless-looking that I had just been refused service at a McDonald's.

At that point, I decided to take a cab home. I bought a New York Times, working on the premise that if I covered my shirt with a newly-purchased NYT I would look sophisticated and disguise my dirty clothes enough that a cab would stop for me. I guess it worked - thank god cab driver's aren't too good to take my money.
Posted by ribble at 1:26 AM 4 comments:

The first, median and last sites I visited each day of the past week. MCTR was giving me shit for the lack of updates lately. I put him in his place. Then he kind of turned it around and put me in my place. That's pretty much what passes for content around here.

Someday someone will read all of these in a row and know everything about me. I'd like to think that someone will be my biographer, but it's much more likely to be either an insane girlfriend or someone trying to arrest me. I'm just not egotistical enough to expect a stalker.

<--Back to the previous post in this series
Posted by ribble at 11:31 PM 3 comments:

Labels: Where I've Been

I have a very rich and varied internal life. One symptom of this is that I often find myself in need of someone in my head that I can talk to. This isn't anything like, say, Boris, who is an imaginary friend in the classic sense of the term. Nor is it anything like, say, schizophrenia. It's just that as long as I'm talking to myself in my own mind, I need to have another character in there who can serve as a sounding board, a neutral observer. Call it an arbiter.

I make no effort to decide what form this individual will take; they simply appear. It's like the cube game.

The first, way back when I was a kid, was an alien. An imaginary alien doesn't understand a lot about the world, so I spent a lot of time explaining things to him. He was a perfect sounding board for a kid because so much of being a kid is making sense of the environment around you. By explaining things to someone who didn't have anything to go on, I got to feel like I knew more than I did and to understand the things I explained more clearly for myself. 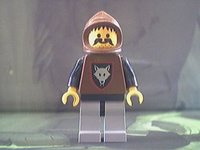 Eventually I outgrew the alien (although I could still draw him from memory if you asked me). Maybe I needed to be judged, maybe I just wanted to feel like a bright, talented, charming kid with a good future, but from somewhere around 10 or 12 I found my arbitrers were interviewers for entrance to high school and college. I explained my actions to them, told them why I did certain things, tried to get them to understand who I was as a person. This lasted even after I got in to College. Perhaps that was the central question of that time in my life: who am I? How can I explain this to myself in a way I can understand?

I don't remember an arbiter during College, maybe because there was always someone around to talk to, but at some point towards the end of school I found that the person I was talking things over with in my own mind was a psychologist. My central question is not one of self-discovery at this point, but of how to solve my problems in a way that will allow me to live a full and happy life.

I am talking about this now because this afternoon, for the first time, I caught myself imagining that I was explaining something to my own son. 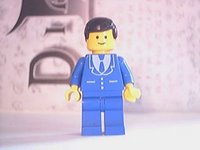 I know how this happened. I have a new baby brother, now seven months old, and on a recent trip to visit my family I found I was able to appreciate him as an adult. This is a big deal - the first baby in my direct family I've been able to relate to not as a child but as a grown-up.

Now, I can't imagine this is universal, but babies are addictive. My baby brother is constantly learning, discovering new abilities, and watching me. Me! Very cool. Plus I'm relatively certain my baby brother is some kind of crazy super genius, Travolta-style.

There's a deeper issue here, though, and it's much more significant. Each of these shifts in an arbitar has accompanied a shift from one stage of development to another, a change in what I consider the most important question in my life.

I have been thinking a lot about starting a family, but I don't want anyone to learn the wrong lesson, here. I am not considering marriage and a baby (not anytime soon, anyway), but I am looking at myself as the head of a household, the decision maker in a family.

Now, it so happens that at the moment the only permanent member of my family is me, but already this simple shift in reference points is changing how I live my life. There's a big difference between the dorm room where I live temporarily and the home where I could live along with my family. There's also a difference between the job the head of a family has and the job I have coming out of college. I actually bought a carpet based on a judgement that it would be a comfortable place for me or my future offspring to lie on while reading some comics.

In school, I don't think I even considered buying a carpet.
Posted by ribble at 3:53 AM 5 comments:

I spent today clearing out the contacts in my phone. This was in anticipation of a paid P.A. gig I have (!) starting tomorrow (it'll only last until Saturday); I'm putting all the numbers I never call on a spreadsheet on my laptop to make space for the new people I'll be meeting on this job.

There's something strangely gratifying about deleting people from my phone. A lot of people represent a part of my life that I don't want to go back to - like contacts and bosses from the crappy Brooklyn newspaper where I used to work. The rest I just don't recognize, which is a little disorienting - how were these people important enough to merit a place in my phone?

Oh, and I've been watching repeats of Survivor: Vanuatu, speaking of people I never want to spend time with.
Posted by ribble at 5:26 PM 2 comments:

The first, median and final site I visited each day of the past week. I spent last week driving across country with my dad. Then Wednesday I came home and went to sleep. I am still not fully awake.

Monday I didn't go online because we were driving from Ohio to New Hampshire and I couldn't get the internet working in the hotel.

You suck, Holiday Inn of Johnsville, N.Y. - and I don't care who knows it.

<--Back to the previous post in this series
Posted by ribble at 4:54 PM 3 comments: